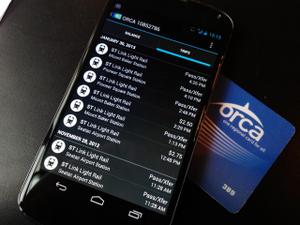 Since its inception, UW CSE researchers have raised concerns regarding the security and privacy aspects of Seattle’s ORCA (“One Regional Card for All”) regional transit smartcard.

Now “there’s an app for that” — FareBot, which enables any NFC-equipped Android phone to extract the data from ORCA (and similar transit smartcards in San Francisco, Singapore, and Japan).

Crosscut reports on the app today in two articles.

“The Geeks Who Cracked the ORCA Card” ; “Smart card: What your ORCA never forgets” ; FareBot