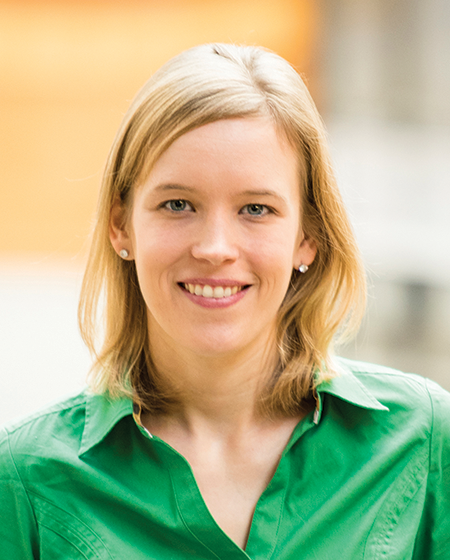 Allen School professor Franziska Roesner has been recognized with a 2017 TR35 Award, MIT Technology Review’s annual celebration of the world’s 35 top innovators under the age of 35. Roesner is honored in the “Inventors” category, recognizing the visionary individuals who are creating the breakthroughs and building the technologies that will shape the future.

Roesner co-directs the Allen School’s Security and Privacy Research Lab, where she analyzes the security and privacy risks of existing and emerging technologies and develops tools to safeguard end users. She is also a member of the University of Washington’s interdisciplinary Tech Policy Lab.

She is the first computer scientist to analyze the risks associated with augmented reality (AR) technologies in order to support the design of systems that mitigate vulnerabilities in these emerging platforms. These technologies are becoming increasingly popular, not only for entertainment but also for assistive purposes, such as heads-up windshield displays in cars. When Roesner began studying them in 2011, products such as Google Glass had not been announced yet and such technologies were still largely in the realm of science fiction. Roesner’s research covers issues associated with both inputs and outputs, from the potentially sensitive sensor data these platforms collect on users in the course of their interactions, to the impact of visual ad content on the safety of users and bystanders. Her impact in AR and virtual reality (VR) extends beyond the lab: her research has made her a go-to source for other researchers, government regulators, and industry leaders on how to counter the privacy, security, and safety risks in order to realize the full potential of these emerging technologies.

Web privacy and security is another area in which Roesner has produced pioneering research that has had a lasting impact on users. In 2011, when web tracking was a nascent concern, she produced the first comprehensive measurement of third-party tracking on the web. More recently, her team studied the evolution of tracking methods over a 20-year period, from 1996 to 2016 using a novel tool called Tracking Excavator. Roesner previously built a new anti-tracking tool, ShareMeNot, whose code was incorporated into the Electronic Frontier Foundation’s PrivacyBadger browser add-on. PrivacyBadger and other add-ons that incorporated ShareMeNot’s ideas are used by millions of people to safeguard their privacy online.

Another user group that has benefitted from Roesner’s user-centric research is journalists and others who rely on secure communication with sources, clients, and colleagues. After hearing stories like how it took reporter Glenn Greenwald months to establish a secure email connection with source Edward Snowden, she collaborated with experts from the journalism community on a study of the computer security needs of journalists and lawyers. Based on those findings, Roesner spearheaded the development of Confidante, a usable encrypted email client that offers the security of traditional encryption technologies without the friction of traditional key management and verification.

“Ideally, we’d like to design and build security and privacy tools that actually work for end users. But to do that, we need to engage with those users, to understand what they need, and not build technology in isolation,” Roesner told UW News.

“As our technologies progress and become even more integral to our lives, the push to consider privacy and security issues will only increase,” she said.

Before joining the UW faculty in 2014, Roesner earned her Ph.D. and Master’s degree from the Allen School working with professor Tadayoshi Kohno, and bachelor’s degrees in computer science and liberal arts from the University of Texas at Austin.